Posted by International Professional Services at 00:43 No comments:

The ATO has just released the Super thresholds which will apply in respect of the 2014/15 financial year.

•    Government Co-Contribution higher threshold – increased to $49,488 (from $48,516)
(This is the threshold above which the co-contribution will not be paid.)

•    Low income superannuation contribution – $37,000 income threshold is not indexed.
(The Federal Government has introduced legislation which, if passed by the Senate, will abolish this co-contribution in respect of 2013/14 and subsequent financial years.)

The Australian All Ordinaries Index has moved down decreasing by +0.2% since closing last Friday to 11:00 am today.

The rest of the world as measured by the MSCI index increased +1.0% in A$ from closing last Friday to end of trade Thursday.

The team at IPS

Posted by International Professional Services at 22:45 No comments:


One of the features of the Australian share market in recent years has been the increase in correlation between stocks.
Basically, correlation is a measure of how two securities move in relation to each other. For example if BHP's and Rio Tinto's share prices followed each other exactly we would say that they were perfectly correlated and the correlation between the two stocks would be 1.0. If these were the only two stocks in their sector there would be no reason to take a stock-specific view as neither would perform better than the other. Rather, you would only be able to achieve excess returns in relation to the index by being overweight or underweight the sector. This is obviously very simplistic but it is the concept that is important, which is that relatively high stock correlations are not conducive to achieving excess returns through stock selection.
Average Excess Return and Average Stock Correlation 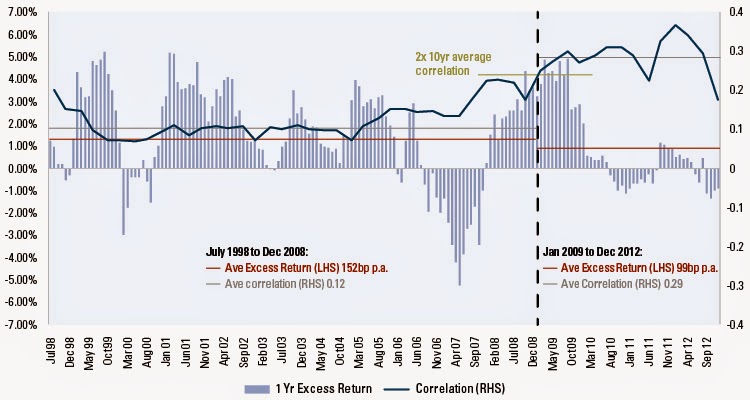 This month's chart compares the increase in stock correlations over the last few years to the average one year after-fees excess return achieved by a selection of Australian equity managers (including GSAM), who have been managing a flagship wholesale Australian Equities Fund since at least mid-1997.
Some of the key observations from this chart:
What does this mean for asset managers who have a high active share score?


Falling correlations is great for active management and bottom-up stock picking, it doesn't guarantee excess returns but it does widen the opportunity set. Why is this? Less correlated stock returns means that there is a greater dispersion of returns at the stock level. This means that there is a greater opportunity to select stocks that may contribute to the excess returns.
Have a great weekend,
The team at IPS
Posted by International Professional Services at 17:01 No comments:

It can be a challenge to understand the need for additional protection, whether it involves enhancing your existing cover or taking on an additional type of cover. The latest health statistics prove the importance of ensuring you have the right type of cover in place.

The Australian Bureau of Statistics 2012 report revealed that heart disease and stroke have continued to remain the biggest causes of death in Australia from 2001 to 2010, accounting for almost 34,000 fatalities in 2010. The third biggest cause of death is Dementia and Alzheimer disease with 9,000 fatalities in 2010, which has basically doubled from 2005 and increased its ranking from 5th.

The Bureau of Infrastructure, Transport and Regional Economics, 2011 also released a report showing that in the 12 months to December 2011 there were 1,292 deaths linked with fatal car accidents.

So with the number of deaths in Australia continuing to increase, most of which are caused by heart disease and stroke which occur quite suddenly, life cover is a critical component of the protection equation.

The leading cause of hospitalised injury was falls (38 per cent), followed by unintentional transport-related incidents (13 per cent). 32 per cent of falls were experienced by adults aged 45 to 64, with the Mean Length of Stay (MLOS) at 5.8 days.

The ABS Work-Related Injuries 2009/2010 report revealed that of the 640,700 people who experienced a work-related injury in the same period, only 61 per cent received some sort of financial assistance in the form of workers compensation. And 69 per cent of employees with paid leave entitlements received financial assistance compared to just 50 per cent of those employees with no paid leave entitlements.

Number of Cancer cases up but so are survival rates
Medical advances have meant that our chances of surviving traumatic events are much better than they were in the past.

Insurers are paying more claims than even before
A common objection from prospective clients is that ‘insurers never pay claims’. The truth is of course that Australian insurers continue to payout hundreds of millions of dollars in claims every year.
According to the Risk Store reports (2009-2011), there has been an increase across the last three years, in lump sum claims and the total dollar amount paid. In fact a total of $443,736,522 (2,531 claims) was paid out in trauma claims in 2010 which increased to $538,720,039 (3,169 claims) in 2011.

The message is clear, Insurance is a must.
The types of events that insurance covers are often unforeseeable and the statistics speak for themselves. So what value would you place on having access to the best available treatment and to take the time off you need to recover? And what value would you place on knowing that in the event of death, your family and loved ones would not have any financial concerns?

The Australian All Ordinaries Index has moved up increasing by +1.2% since closing last Thursday to 12:45 pm today.

The rest of the world as measured by the MSCI index is up by +0.5% since closing last Thursday to end of trade Wednesday.

The team at IPS
Posted by International Professional Services at 21:02 No comments:

Don’t bet against China – at least in the short term!


A common big picture theme so far this year has been the generally positive news out of the US and developed nations offset by a series of disappointing numbers and articles about China. Even our Reserve Bank Governor commented on slowing growth in China in the 1 April decision to keep rates on hold at 2.5%. The issues facing China can be broadly grouped under three headings:
o    First default in China’s corporate bond market since it began in its current form.
o    The so called “shadow” banking system (essentially loans to businesses outside of the banking system made by investment products offered to the general public) being described by some as being out of control.
o    Possible further credit tightening that could affect buoyant property prices.
o    Typically, growth is weaker around the Chinese New Year holiday, but the latest HSBC PMI (Purchasing Managers Index) released on 31 March 2014 came in at an eight-month low of 48 (figures below 50 broadly indicate slowing growth), although the official Government numbers are a bit higher.
o    Has the massive infrastructure build and urbanisation that fuelled growth reached its peak?
o    China has lost competitiveness as a low income, export led economy and must change in order to keep growing. For example, in the last six years exports have fallen from 38% to 25% of GDP.
o    To move from an income per head that ranks below Brazil, Mexico and Botswana (and only 13% of the US) the Government recognises the need to develop its financial system, including currency liberalisation, to more developed standards, fight corruption and pollution, work on the problems caused by urbanisation and generally increase standards of living.
o    Household consumption at 36% of GDP is amongst the world’s lowest, although consumption is increasing from these lows at a healthy pace.

Why does China matter? Apart from being the second biggest economy in the world and moving forward to also becoming a financial powerhouse, it is worth recounting the trade numbers.

From China’s perspective, its biggest export destination is the US, followed by Japan. Australia only ranks 12th in terms of China’s exports and 6th in terms of imports.

So where is this giant juggernaut of an economy headed?
Talking to some of our portfolio managers just back from mainland China and our economist, and reading some of the mountain of research that pours into our office every day, really highlights just how big and complex this question is.

In terms of the credit issues described above, there will be more defaults and in many ways this is akin to China’s capital market system maturing and starting to price credit according to true risk. Importantly, and very much unlike the US sub-prime debacle, we think there are enough reserves in the banking system and Government to handle any likely problems with credit and the shadow banking system. In a negative scenario, the Government can effectively order the strong banks to assume the debt of weaker entities.

The growth question is a big one. Continuing growth in the US, Europe and Japan will definitely help China’s exports (many are saying Chinese export growth will pick up by 1.5% due to these factors). In the short term, the Government can also easily up its infrastructure spend to ensure that they “dial in” the stated growth target of 7.5%. The longer term growth question is more related to how successful China will be in transitioning form “old China” (low value add exporter, with massive infrastructure build-out and urbanisation) to “new China” (growing middle class, appropriate legal systems, more value add production and services, growing and open financial system etc.).


From an investor’s point of view, this growing economy should lead to multi-faceted investment opportunities. The bottom line is don’t bet against China achieving its growth targets in the short term, but keep an open mind on how it will develop from here and where the real investment opportunities lie over the next several years.
Weekly Indices:

The Australian All Ordinaries Index has moved down decreasing by -0.1% since closing last Friday to 11:40 pm today.

The rest of the world as measured by the MSCI index decreased -3.7% in A$ from closing last Friday to end of trade Thursday.

The team at IPS
Posted by International Professional Services at 20:25 No comments: